So Maybe I’m Not That Broken.

I haven’t written in what seems like weeks.  Maybe it has been. In my last post I was broken.  I thought I was beyond anything that could fix the pains that have been weaving their way in my life.

And here’s the thing… so maybe I’m not that broken.

Let me tell you why I thought I was and why I realize maybe I’m not.

Daniel (that’s my kid) turned 18 last November.  For some time before that I could see where his life was changing, was different.  Sometimes, for the better, but sometimes (and it often feels like most of the time) the changes have been for the not so better.  He’s decided that it’s time to be his own person, his own adult and live his life on his terms. It hurts.

Two weeks ago, he came to the house and got his things. His bed. His clothes. His this and his that.  I don’t know when I’ve felt pain more real.  The only pain I can even come close to in my life was a break up with the person I thought was my It.  And so like then, I’ve been nursing a broken heart.  Praying and then praying more that Daniel would have some epiphany and come home, that life would return to the time before this whole “I’m an adult” thing became a part of his daily vernacular.  Well, it hasn’t and it won’t.  Maybe he’ll figure it out, maybe he’ll come back home until he’s in place and a space where he’s more ready for what the world is going to throw his way.  Maybe he won’t. 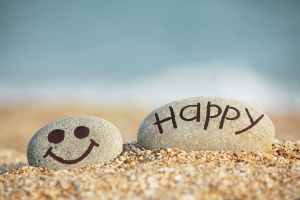 And then the box came to my office.

Mrs. Bennett, was my US History teacher my junior year of high school at Aurora Central.  Amazing woman.  She’s one of the many teachers I’ve been blessed with that helped me and countless students realize there is so much value in learning.  She had reached out and offered to send some things she had found that might be helpful to the Alumni Association and to #ThePromDressProject.  Today, I opened the box.  When the box was opened…I found my happy in it.  Who knew that’s where it had been hidden?  In this box are dresses upon dresses and bags upon bags, each carefully packed with beautiful things to be shared with our young ladies for upcoming homecoming and prom.  And just like that, I found my happy.

My heart, while it still hurts for the “loss” of Daniel striking out on his own is somehow at the same time filled with such joy in the ability to continue being a blessing to the young ladies of Aurora Central and other ladies anywhere and everywhere.

So the point, if there has to be one, is happy and heartbreak can exist in the same time and space.

This entry was posted in Uncategorized. Bookmark the permalink.