It’s been just over a week since returning home from Nebraska, celebrating the life of my Aunt Diana.  I miss her.  She lived an amazing life.  The life of a daughter, sister, wife, mother, and carrier on “er” of my grandmother’s Chocolate Cake... 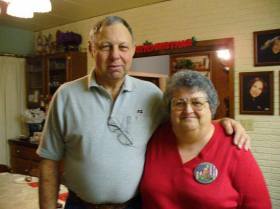 One of the highlights of any visit to Nebraska was knowing our Aunt Wanda would make taco salad, our Uncle Ron would make a pancake breakfast, Aunt Diana — well anything she’d make was amazing.  I believe it’s the gift of being a farmer’s wife.  And that my Grandma Dottie would make chocolate cake.

When my Grandma Dottie passed away not so many years ago, I wondered who would carry on the legacy?  Perhaps legacy is a strong word, but a true word for sure.  While in her younger years the cake was made from scratch or so I am told…so was the fudge frosting.  My Aunt Diana picked up the torch and carried on the memory of something so simple that created so much joy for so many for an almost infinite number of years.

I know it may seem odd to trouble over such things, but they are just the things I fret over.  Legacy.  Carrying on what makes our family ours.  So before my Grandma Capone passed — I learned the finer art of vinegar peppers, pickled onions and eggplant *editor’s note — two parts water one part vinegar does it — as well as her sauce.  ** another editor’s note, never use a metal spoon, it “kills the sauce” and in fact, oregano has no place here. 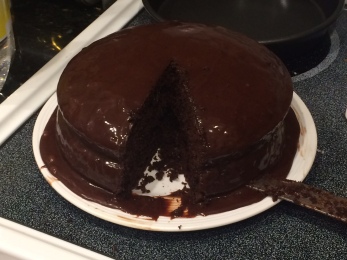 And today… I baked.  I am NO baker.  I admit this freely.  But today, another torch has been passed.  Grandma Dottie’s chocolate cake with fudge frosting.  I will concede  the cake is a box cake, but the frosting is that of my hand, and while on the first attempt not perfect — far from, I will hone the craft, ensuring that Grandma Dottie’s cake lives on.

This entry was posted in Life, Uncategorized and tagged cake, Family, legacy, tradition. Bookmark the permalink.